Asus launched the ZenFone 5 series during the Mobile World Congress this February, with the ZenFone 5, and the ZenFone 5Z all aimed at selfie-loving consumers with reasonable performance. We have already put the mid-range ZenFone 5Q to our final assessment to see how will it execute as a solid contender among other competitors in the same bracket. This smartphone is also the point of entry in the company’s latest series. Will this make to oblige the consumers to purchase? We analyzed to find out. 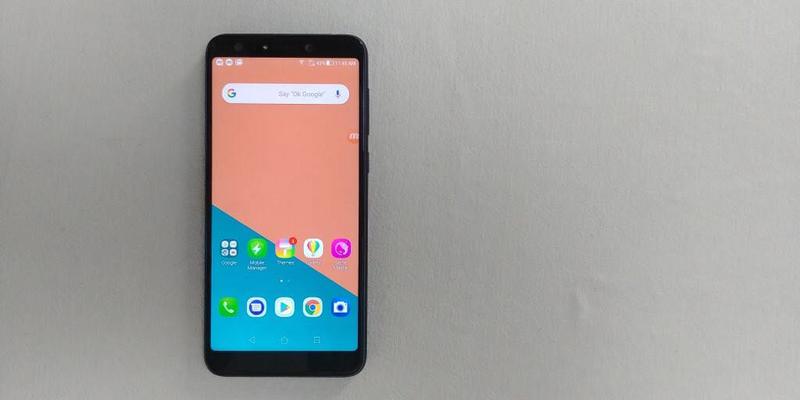 The ZenFone 5Q is very premium with glossy back design and pleasurable feeling. It has a glass and metallic body, and light as it weighs 168 grams. The IPS LCD display has great viewing angles with no luminance or hue changes. The brightness is good enough for outdoor use, but the glossy stern finish may prove to be difficult on a sunny day wherein the reflections will conceal the details that are being shown on the screen. 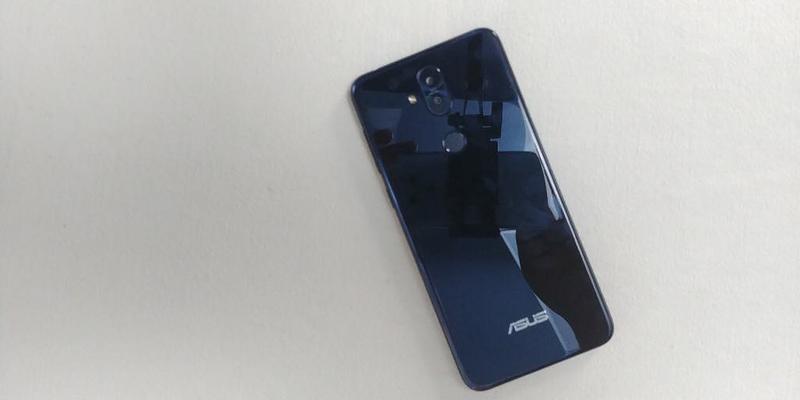 It is equipped with a 6.0-inch display with an 18:9 aspect ratio. The display has relatively small top and bottom bezels. The case is just 7.7 mm thick, and holding the smartphone feels good in the hand thanks to its well-rounded corners. It appears to be extremely good and stable. Further, it’s made from metal with a glass finish on both back and front. There are three colors available: Midnight Black, Rouge Red, and the Moonlight White.

The smartphone runs on ZenUI 4.5 based on Android 7.1.1 Nougat. ASUS will be officially upgraded the ZenFone 5Q to Android 8.0 Oreo this year, together with the ZenFone 5 and the ZenFone 5Q, but the timeline is still unknown. Like the previous versions, the current ZenUI offers heavy customization and comes with few pre-installed applications. 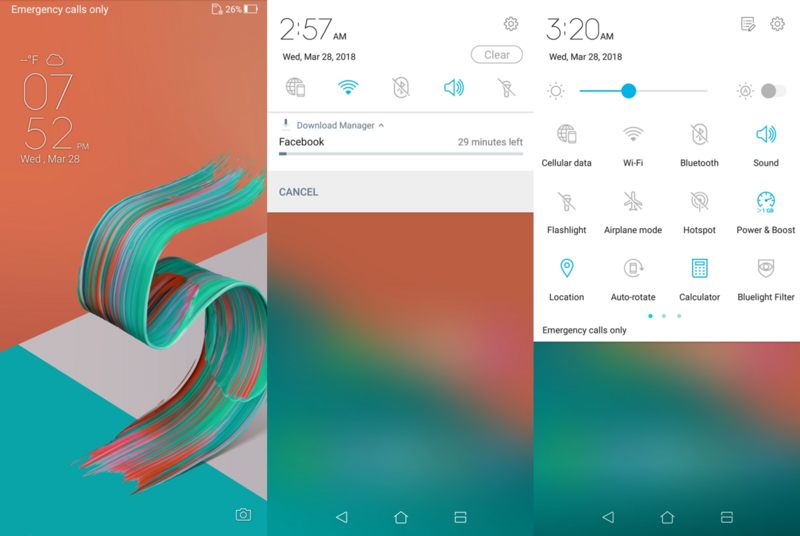 The user interface also comes with an array of tools to have a better experience. Swiping from top to bottom shows the quick settings toggle. It can customize it to arrange icons depending on the user’s selection. As always, there are lots of wallpapers, themes, and animation.

From the previous model, the ZenUI’s safeguard option is found in the settings. This SOS feature allows helping the user in case of emergency. Generally, the UI is smooth and giving us a lag-free experience. We were impressed to look the improvements in the ZenUI. In times past, it is used to be an opposing remark for the company’s preceding smartphones.

The ZenFone 5Q comes with Snapdragon 630 with Adreno 508 GPU and 4GB of RAM. During our time in using this phone, the performance is smooth and is able to handle heavy tasks and games. The device can even play a large amount of low-end and high demanding games without any hassle. It doesn’t show any particular heating, even playing in long gaming runtimes. 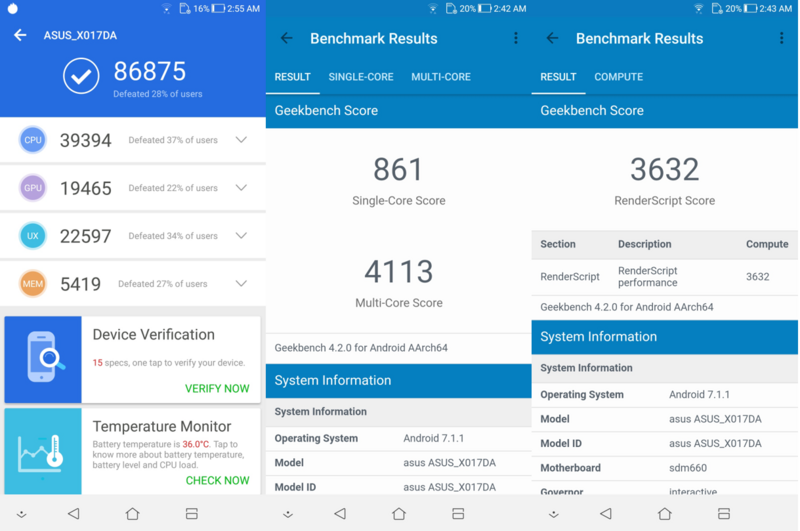 On the other hand, the fingerprint scanner of this phone works pretty fine. Other than unlocking the phone, we can also use the Face ID to open the device using our face. However, it doesn’t perform well in low-light conditions.

Our review unit comes with 64GB of storage. It can be expanded up to 400GB via microSD card. Just in case you want to see the benchmark scores, kindly see the screenshots further down.

The two front cameras are the main highlights of the show here. The main front sensor is a 20-megapixel Sony IMX376 sensor with 85.5° field of view and a f/2.0 aperture. The second front sensor has an 8-megapixel with 120° wide-angle lens for group selfies.

The resulting images in all selfies taken in the normal mode have better colors and details. Low-light selfies are decent but not spectacular. The single-LED flash helps in extremely low-light scenes. Group selfies are okay but the colors appear to be washed out in some parts. 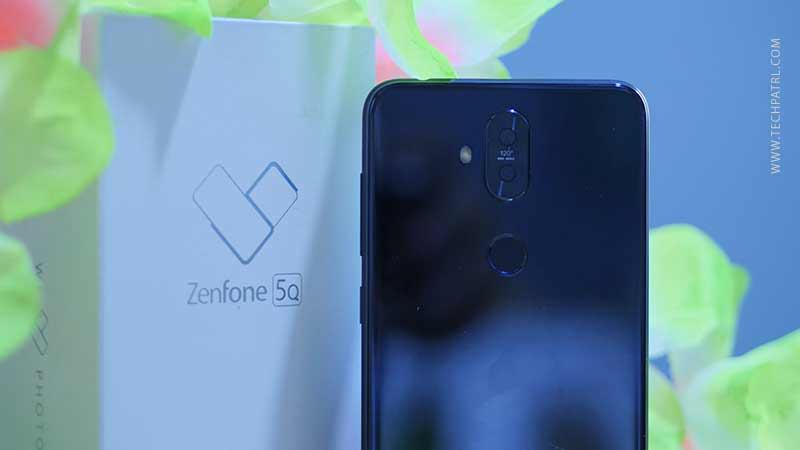 At the back, there are another two cameras, consisting of the main 16-megapixel OmniVision OV16880 sensor with f/2.2 aperture, and another 8-megapixel OmniVision OV8856 sensor that has a f/2.4 aperture. They’re accompanied by the phase detection auto-focus, electronic image stabilization and LED flash. It does a good job in outdoors, mostly in landscapes and macros. The HDR helps in and manages to get noise-free shots indoors. In low-light, the noise is prevalent but can be manageable at the same time. Focusing is quick during the daytime but reduces in the nighttime.

The 4K video recording can be used both the selfie and back cameras. The camera app is justly undemanding, giving the choice to shift or move between the main and wide-angle back or front sensors, and a sort of shooting modes like the Super Resolution, Pro, Panorama, Time-lapse and Slow Motion. Lastly, the portrait mode works satisfactorily.

The ZenFone 5Q supports 802.11 a/b/g/n/ac Wi-Fi, meaning that the device is able to connect to both 2.4Ghz and 5GHz Wi-Fi networks. Despite having the good wireless technology, it performs poorly in getting reception, even in public place. For data networks, the smartphone support four 2G bands, five 3G bands and nine (FDD) 4G bands that are suitable for global roaming. Some of the variants will get lesser LTE bands, though. The smartphone’s GPS module cannot find a location indoors, and when outdoors, it took a long time to spot our location. 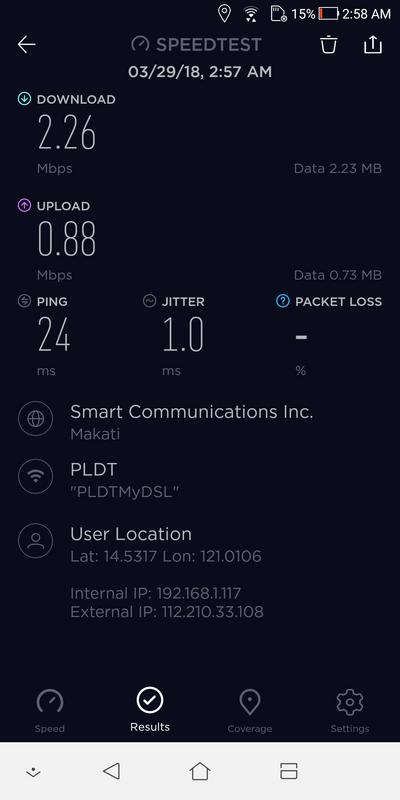 There are two speakers located at the bottom of the device. The sound quality is good. The company also put the outdoor mode that is capable of optimizing the sound, especially in noisy environments. Moreover, the Audio Wizard on the settings helps the user depending on their preference to set custom sound profiles. There’s no difference at all, but you can tell the dissimilarity. 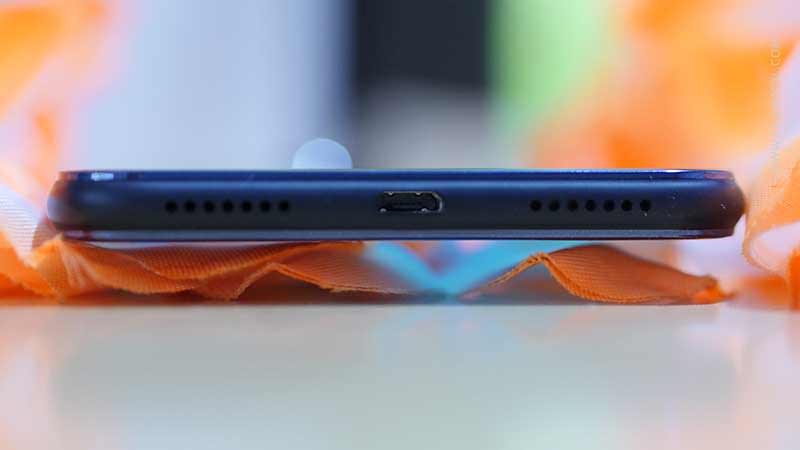 The ZenFone 5 is fueled with a 3,300 mAh non-removable battery, which yielded 10 hours and 1 minute in our PC Mark benchmark test, which is better than the average score and thanks to its chipset’s energy-efficiency. It shines on its energy management system as it doesn’t warm even under maximum load. With regular use, we can get up to a full day on a single charge, and a possibility a second with less load. 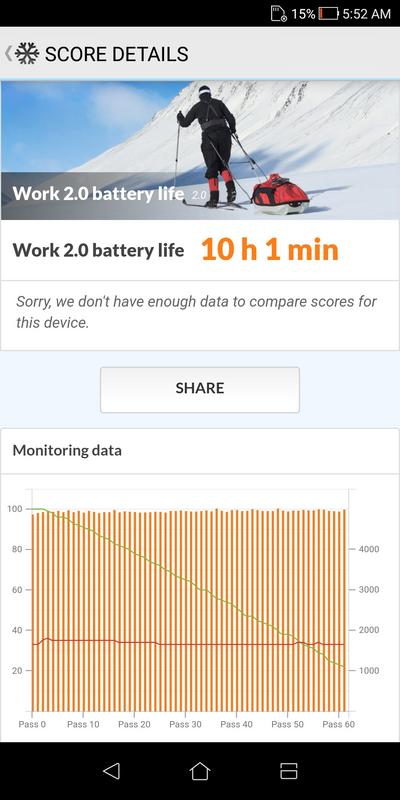 It doesn’t support fast charging, so you’ll have to wait about two hours to fully charge the phone, which is okay for us.

The Asus ZenFone 5Q is a pretty-well recommended smartphone in the mid-range segment. We were surprised that it has a capacity of recording 4K videos. The ZenUI 4.5 certainly looks cleaner, but not much has really revised below the screen from the previous version. 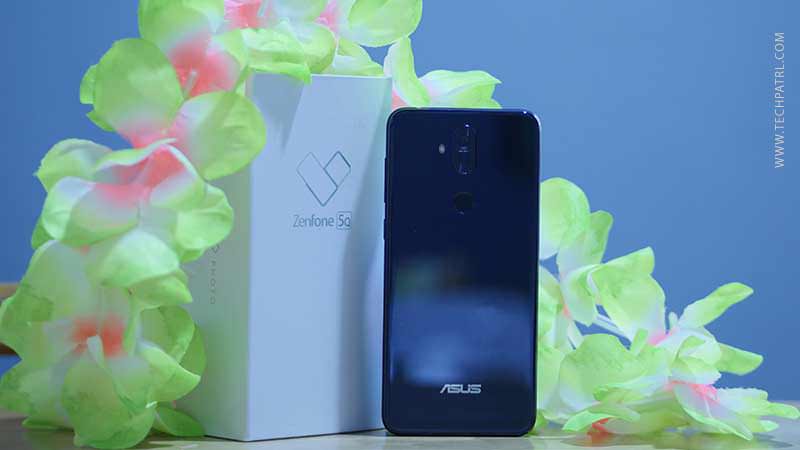 Our main concerns here would be the weak receptions on both the Wi-Fi and GPS. Of course, the micro-USB port for charging and transferring of files, as some of the smartphones are using the Type-C connectors nowadays.

However, if you are looking for a smartphone that captures impressive selfies, then look no further. The ASUS ZenFone 5Q does a lot of good things to do. The performance is good, as well as the battery life. The power consumption is pretty low, despite under load. And lastly, the camera quality of the phone with comprehensive features. If you don’t care the aforesaid downside or are looking for a smartphone with long battery life and awesome camera shooters, then the ZenFone 5Q is probably the right device for you.

We’re not finished yet! Courtesy of ASUS Philippines, we will be raffling (1) ZenPower Slim 6000 and (1) VIP Seat to the local launch of the ZenFone 5 series. To be eligible, follow these mechanics: