The successor of the Nokia 808 PureView and the Nokia Lumia 1020 is going to be released very soon! SuomiMobiili has received the first information about the upcoming Nokia 9. It was sent by an unknown source revealing all the details of the said future high-end device.

Like the recently announced Huawei P20 Pro and the Mate RS, the Nokia 9 will have also an enthralling three rear camera lenses at the back! The primary sensor has a 41-megapixel wide-angle lens with a dual photodiode technology, optical image stabilization, and 1.4-micron pixels. It is accompanied by a single LED flash and Xenon flash. The second one, the 20-megapixel telephoto lens has a 1.0-micron pixel instead, but the aforementioned dual photodiode technology and optical image stabilization are present. Lastly, the 9.7-megapixel monochrome lens. Flipping to the selfie camera, there’s a 21-megapixel with f/1.8 aperture and display flash. 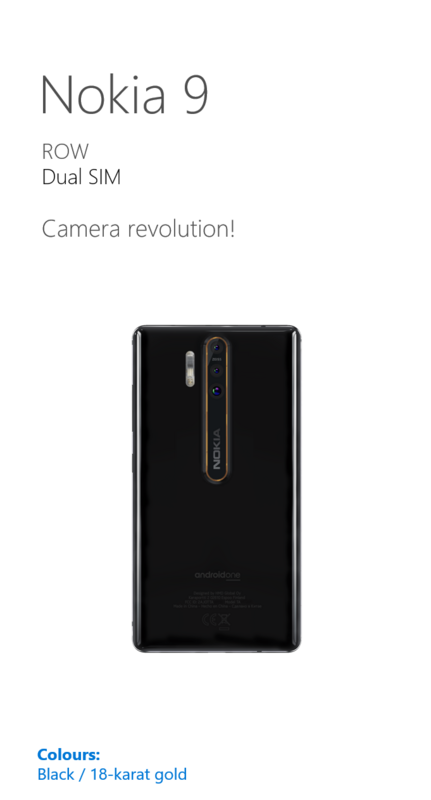 The design has not been totally changed, as it suggests that this smartphone might not be adopted the new 19:9 display. Its display is a 6.01-inch QHD resolution with 18:9 aspect ratio, 2560 x 1440 pixels and Corning Gorilla Glass 5 protection. There’s a combination of a ceramic backplate and 18-karat gold finish to feel more elegant and premium to hold. Also, it carries an IP68 waterproofing to withstand dust and protected against water damage for up to 30 minutes in 1.5 meters.

At its heart, the Nokia 9 has a Snapdragon 845 chipset coupled with Adreno 630 graphics, 256GB of non-expandable storage, and large 8GB RAM. It runs on Android 8.1 “Oreo”, and has similar innards to the Nokia smartphones that were announced in MWC last January, it’ll part of the Android One program. Battery-wise, the phone is said to pack 3,900 mAh capacity with Qualcomm’s Quick Charge 4.0 support and wireless charging.

To wrap-up the specifications, the upcoming high-end device will have five Acoustic Overload Point (AOP) microphones and a smart amplifier on its single speaker. Additionally, it doesn’t have the 3.5 mm jack but a USB Type-C adapter will be included in the retail package. Pricing remains unknown and this should take it as a pinch of salt. If these features are correct, then maybe, the aforementioned Huawei P20 series and the Mate RS will be the smartphone’s biggest competitors in the market. Stay tuned for more details. 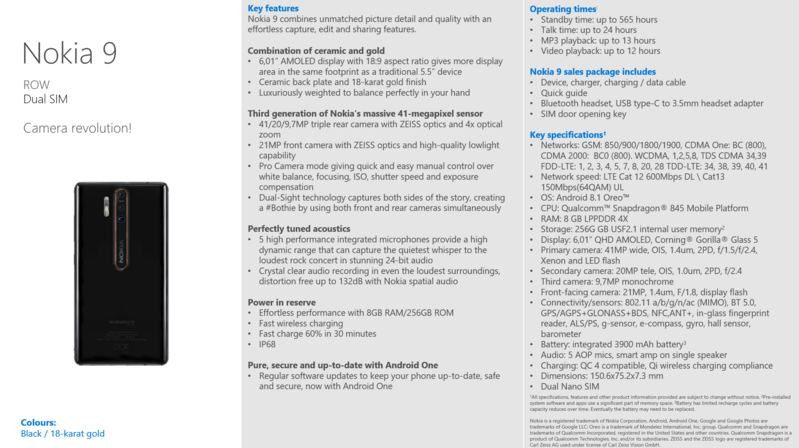