The OPPO F7 is the Chinese latest flagship smartphone offering here in the Philippines. Sit and relax as we reveal our OPPO F7 Review.

Dubbed the #SelfieExpert OPPO claims that this device comes with their best selfie camera yet, alongside in using the flagship chipset of MediaTek for 2018. As the smartphone with the highest megapixel on the front camera (25-megapixel), the device is again sticking true to their #SelfieExpert claim that aims to challenge all the other competitors to date.

The plastic body with a polymer composite material on the back together with the glass panel is a touch differently compared to all the previous models with a metal back panel. With most of the past models have a good track record, this device is set to become a hot-selling device. Will it exceed our expectations, especially the performance and camera quality? 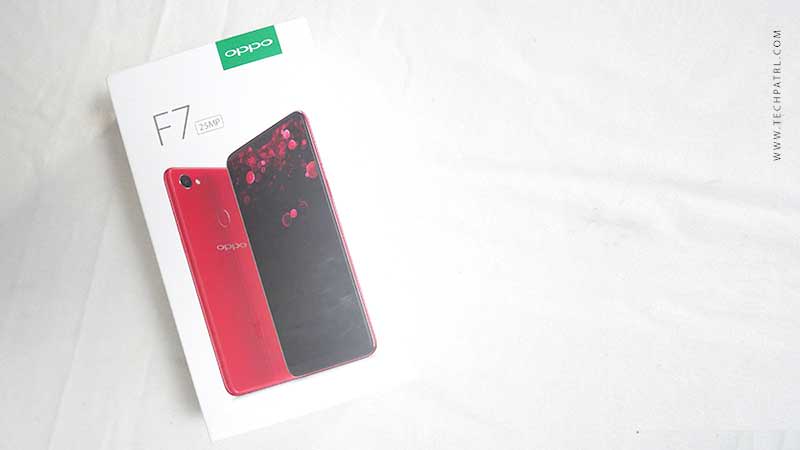 The all-plastic back body is situated below the Corning Gorilla Glass panel, and it’s a comfort to hold despite being smudgy. Other than that, it is an appealing device. It is available in two colors: Solar Red and Moonlight Silver. There’s a Diamond Black offer but it is currently available in India only.

Move on to the controls of the phone, the volume rockers are located on the left. The Dual-SIM/microSD card tray and the power button lies on the right. The bottom part is where the busiest area, as the speaker grille, 3.5 mm audio jack, the microphone and the microUSB 2.0 port are found here.

This time, OPPO delivered the 19:9 aspect ratio display with 2280 x 1080 pixels using LTPS IPS panel, measuring in at 6.23-inch. The notch on the top of the front display houses the front camera, the sensors and the earpiece. There’s no LED notification.

The pre-installed screen guard doesn’t fit with the edges, so it is a drawback against fingertips whenever we swipe both sides of the notch.

On the other hand, the brightness seems to be pretty low under maximum level, so we can’t see what are the details on the phone under a bright sunlight.

You’ll get nice viewing angle while you’re in a reading or gaming mode. 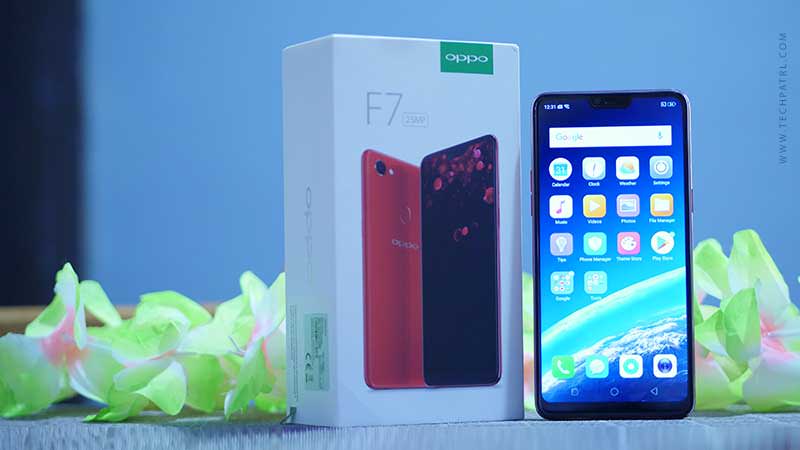 The OPPO F7 runs on its proprietary Color OS 5.0 that is sitting on top of the Android 8.1 Oreo. The interface is what you expect from almost any other Chinese company. There’s no app drawer and you have a customizable user interface. The applications still can be organized by folders and of course, put some widgets on the home screen. 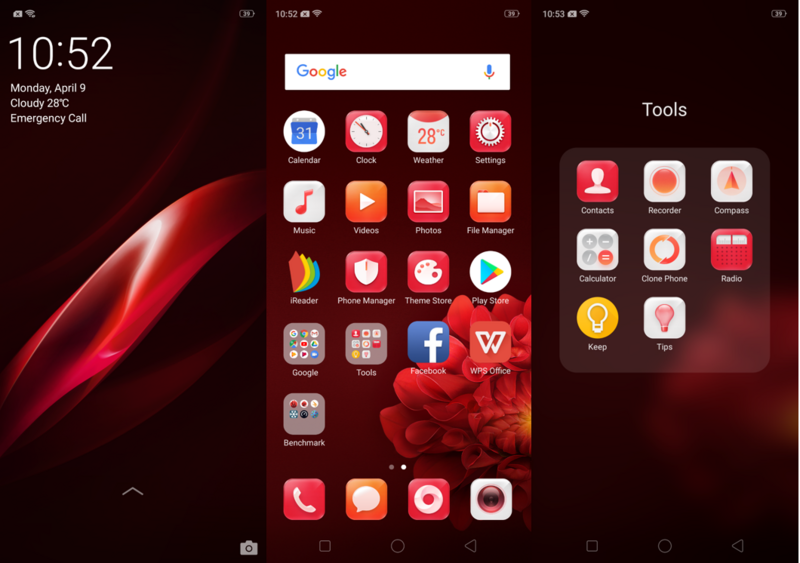 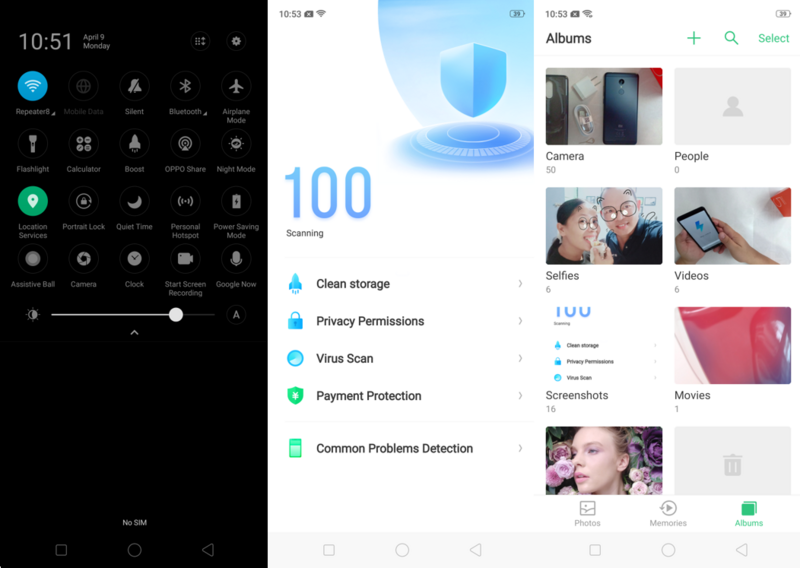 The fingerprint scanner works pretty accurate and responds very quickly in less than a second. The implementation of the face unlock technology is a good deal on the device as it recognizes 128 points in the registered face. It works pretty well, too. 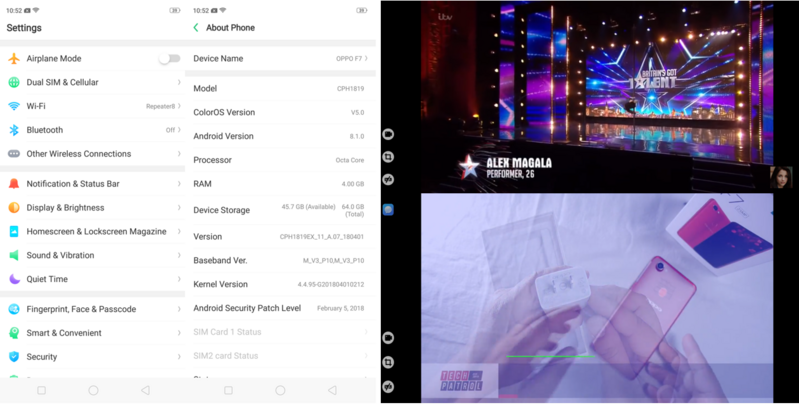 In terms of gestures, the on-screen navigation keys can ditch, similar to the iPhone X. We get the horizontal line at the bottom of the screen as a Once enabled, you get little horizontal markers at the bottom of the display. There are different gesture styles to select from, depending on your choice. The company has also applied some useful shortcuts that take benefit of the screen space on both sides of the notch. The “Fullscreen Multitasking” feature, allows the user to control the Quick Apps and Quick Function. The former permits to put the shortcuts on some of the applications to the right of the notch, and on the left, there are some controls for screenshot mode, screen recording, and DND mode. These can be obtained when the phone is in the state of landscape mode, by swiping the area from the notched panel. There’s also a Game Acceleration mode that gives better playing experience.

The SoC that is fitted on the device is an Helio P60; which is the flagship from the MediaTek this year. The 2.0GHz 8-core processor does prove that this smartphone can’t sit in a lazy way. Despite the mid-range processor type, this is so far OPPO’s best device to date in terms of hardware. With 4GB of RAM, the multi-tasking activity should be at ease with the phone and does perform even better than expected. It gives it a good journey through any sort of operation by running multiple apps at the same time. Surprisingly, even when there are many game applications open, the F7 manages all the other applications smoothly with no lag. In terms of heat management and power consumption, it does not heat up for no reason as well. 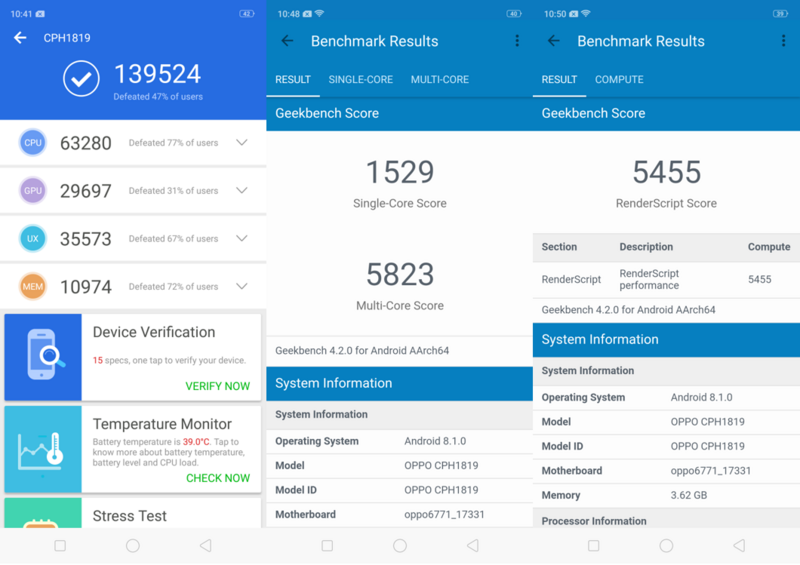 For graphical processing, it packs a Mali-G72 that runs along the main chipset. It means that the OPPO F7 should be able to perform a wide variety of mobile games without any difficulty. The device could run proper, heavy graphics games, and it didn’t heat up to such high temperature.

OPPO has equipped the OPPO F7 with a 16-megapixel camera at the back, which uses a f/1.8 aperture and phase detection auto-focus. It can also record 1080p videos at up to 30 frames per second. The sharpness of the images taken is actually good with a high amount of details. Surprisingly, it performs decently even in dim light conditions, thanks to its small aperture.

The selfie camera is a whopping 25-megapixel with f/2.0 aperture and boasting A.l. beauty technology. The algorithm helps in what beautify level should be needed in order to get amazing selfies. The result, with the beauty features built, is quite amazing. Selfies are highly detailed with good colors and dynamic range, and even with just f/2.0, we could get very good low light selfies with little noise. To add some fun in using the front camera, OPPO adds AR stickers. You can even use the Depth Mode that works pretty fine in blurring the background and has a nice edge detection.

In terms of wireless connectivity, the phone sticks with Bluetooth 4.2 LE that we see so much nowadays. We get also 4G LTE, 3G HSPA+, and 2G networks. Those are the basics that you should be getting anyway. The GPS, on the other hand, locates us easily. The speaker quality is good enough and has a sufficient loud decibel to hear even in a noisy environment. OPPO adds audio enhancement, to boost the quality of the sound, using a pair of earphones. 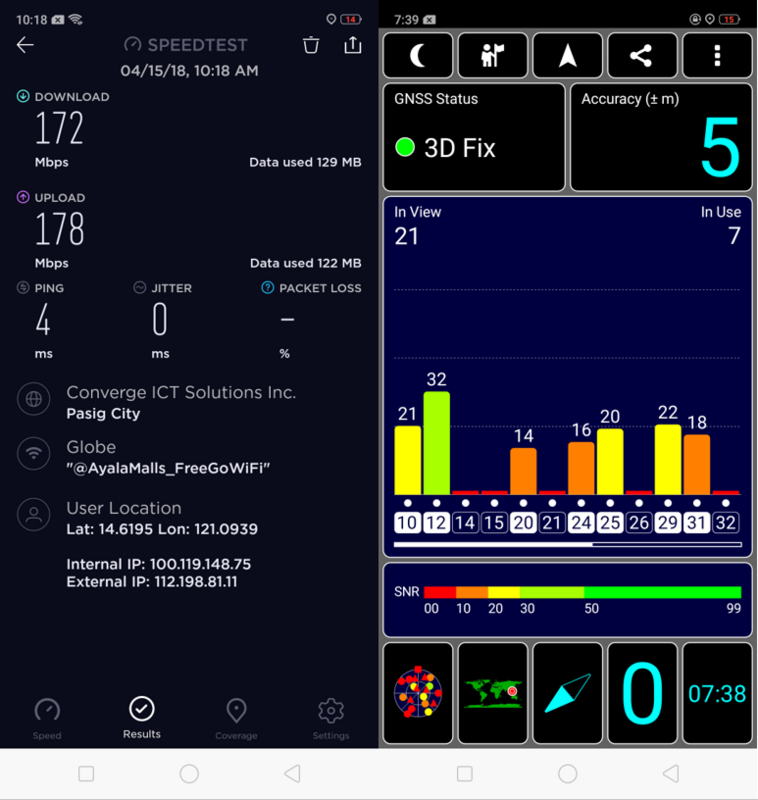 The OPPO F7 comes with a 3,400 mAh battery. It is not that small for such a big device; though it is slim at 7.8 mm. This device exactly puts all habits aside when it comes to battery life. It may not be as huge as some of its competitors but the battery lasts up to more than a day on a single full charge. By moderate usages, such as replying some necessary texts, listening music thru Spotify and watching few YouTube videos, and surfing the net, it can literally get a full day of battery life. While using the device in the heavier state, like playing high demanding games for an extended period of time might drain the battery runtimes to a little less than a day. As there’s no fast charging feature, the smartphone took about two hours, until the empty battery was recharged to full 100%.

The OPPO F7 is one of the laudable devices that we’re recommended. Three of the most amazing things about the smartphone are the build quality, performance, and the camera. Also, it performs exceptionally well and can handle most tasks that you play at it. Further, it has an attractive design and the display is good, Both the rear and selfie cameras tend to deliver its best shots. The battery could last more than a day. We believe these would have made the smartphone the must-have phone for anyone looking for a device in the P15,000 – P20,000 price bracket.

However, we really wish that OPPO had more attention on its charging time as it doesn’t have the VOOC fast charging feature. Another one, it comes with micro-USB as some of the smartphones, even in mid-range are now using the Type-C for better transferring of files. In overall production, OPPO F7 is yet another nice product from the company and does have an attractiveness of its own and we see why some consumers would rather choose for it over the usual features. 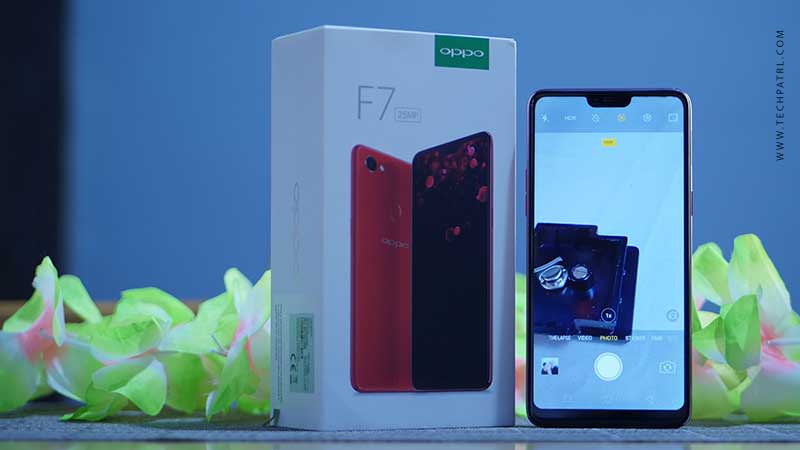