PLDT and its wireless subsidiary Smart Communications, Inc. (Smart) have been cited for being the country’s fastest fixed and mobile networks for Q1-Q2 2018, respectively, by Ookla, the global leader in internet testing and analysis.

PLDT achieved a Speed Score of 17.31, with average download speeds of 22.84 Mbps and average upload speeds of 23.45 Mbps. The fixed network award is based on 29,076,090 user-initiated Speedtest nationwide for the same period. 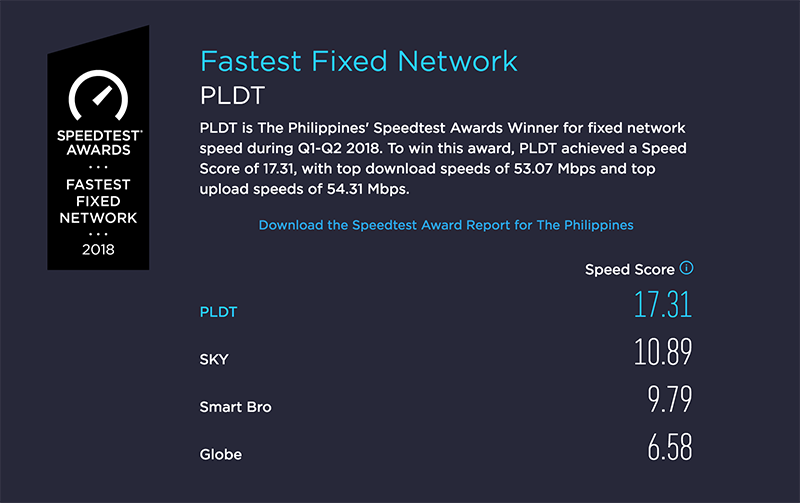 Smart achieved a Speed ScoreTM of 14.98, with average download speeds of 17.25 Mbps and average upload speeds of 7.65 Mbps, based on 2,118,464 user-initiated tests taken with Speedtest on LTE-capable devices in the Philippines for Q1-Q2. 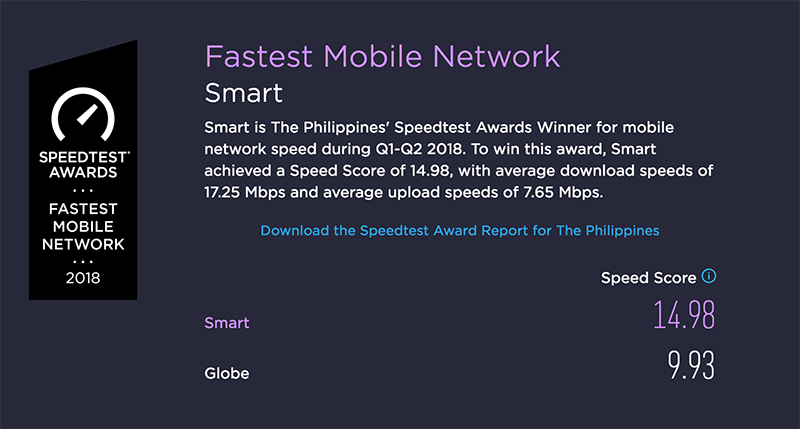 The initial data included in Ookla’s country reports showed Smart posting big leads in key cities like Quezon City, Makati, and Manila, for example, while PLDT is way ahead in Quezon City, Pasig, and Manila.

In Quezon City, for example, Smart posted a Speed ScoreTM of 24.09 Mbps, more than twice the speed of the competing network. This reflects the results of the major network upgrade activities that Smart recently undertook in the city, including the activation of LTE-Advanced and carrier aggregation.

Smart is accelerating its deployment of LTE, LTE-A and carrier aggregation across the country as part of Smart’s efforts to improve mobile data experience nationwide. It is on track toward to fulfill its commitment to the National Telecommunications Commission to cover 90% of the country’s cities and municipalities with mobile data service by the end of this year.

According to Smart, they are doubling the number of LTE base stations to about 17,700 nationwide and raising the number of LTE-equipped cell sites to more than 6,800 by the first quarter of 2019, using frequencies that are compatible with CA-capable smartphones available in the market today.

Meanwhile, as of the first quarter of 2018, PLDT has broadened the coverage of its fiber-powered broadband network to 4.4 million homes passed, up from 4.0 million at end-2017. In the same period, PLDT also increased its capacity to 1.4 million lines from about 1.0 million and raised its total fiber footprint to about 187,000 kms.

PLDT’s fiber rollout includes both fiber-to-the-home (FTTH) and hybrid fiber technologies that will deliver fiber-speed broadband to virtually all DSL subscribers by 2019.

Acer PH celebrates "Acer Day" alongside with 20 other countries; Feat Moira dela Torre, IV of Spades, and the G-Force

From ADSL to Fiber; PLDT starts upgrade for FREE!