As it begins to be usual, Samsung is in the process of reforms in its catalog. The Galaxy A line has absorbed the now defunct Galaxy J line, and the models of its mid-range has been grown. That’s why we now move between phones whose names already correspond to two figures, like the Samsung Galaxy A50 that is placed approximately at the midpoint of its category. 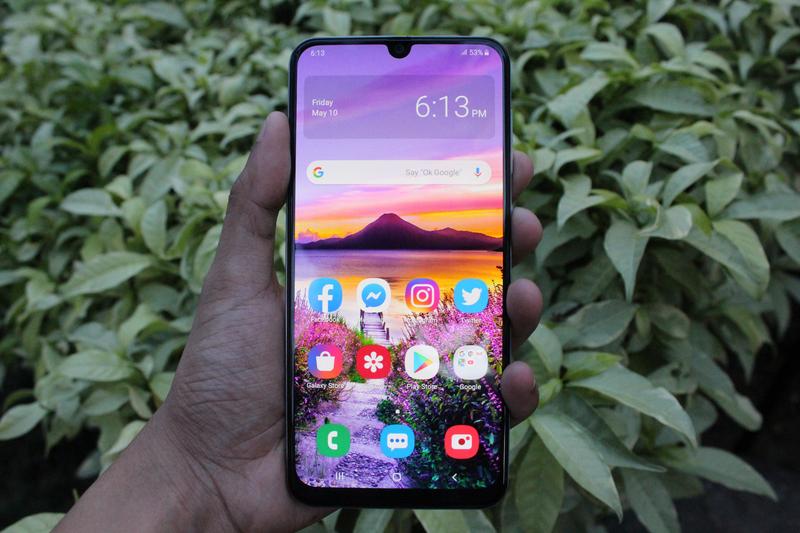 A mid-range phone with an aggressive price for what Samsung is used to offering, and which has now fallen on our revuiew. Join us on how this giant of 6.4-inch device of the Korean firm has behaved. Let’s start with the review of the Samsung Galaxy A50.

We are in the land of the Galaxy A, and that means that we move in the mid-rangers of the market, although with the latest merger of the A and J lines of the Korean brand, the range of products covers even more space.

Samsung plays with their designs so that, except for specific details, we could have any company phone in hand and it would be difficult to distinguish them, and with the Galaxy A50, exactly that happens. A compact, robust phone with a plastic body that may look like glass and enjoys excellent touch. And since we have a plastic mobile in hand, resistance to fingerprints is remarkable. Unfortunately, there’s no certification against dust and water, which would have rounded the design.

As for the structure, there is nothing that goes out of the ordinary. On the front, we have the 6.4-inch panel that occupies almost the entire front, with reduced frames but not as much as their older brothers, and with an AMOLED screen that has a notch on top. No physical buttons here, and there is no fingerprint reader on the back because Samsung has mounted it on the panel itself. Maybe a point to improve, as we will see in the performance.

The front is flat, here there are no curved screens, but the rear one yields with the edges, offering a good grip that is combined with an acceptable weight, 166 grams, for a device of these dimensions. The distribution of buttons is quite classic. The volume and power buttons are on the right, Type-C charging port at the bottom next to the headphone jack, and the tray for the SIM on the left side of the phone.

In the back, a design also sober , especially for the absence of the fingerprint reader, which gives all the prominence to the rear camera. Or rather, to the three rear cameras. Three, located in the same module in a vertical position in the upper left corner. Under it, the flash. The rest of the back is only for the logo of the brand, concluding a design quite acceptable but not very ambitious. Maybe a problem for those looking for a striking terminal. Although the blue of the model that we have tried already captures enough looks.

It can not be said that the Galaxy A50 is a small device, and its 6.4-inch of screen attest it. A Super AMOLED panel marks the house, which here enjoys a Full HD+ resolution and brings pixels up to 2,340 x 1,080. We talk about about 85% of the surface of the front occupied by the screen, a more than decent figure moving between average ranges. 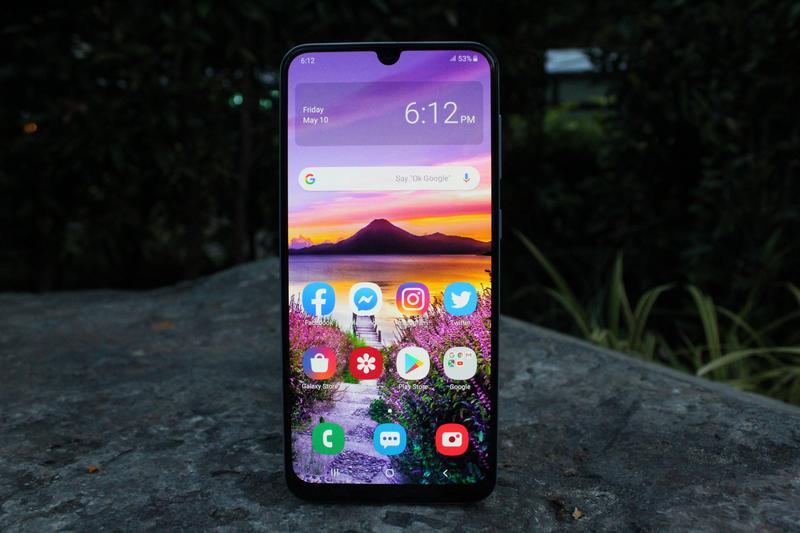 This is an OLED panel, so we have plenty of brightness and contrast. Samsung knows what to do with the panels that they manufactures, and in the Galaxy A50, we have vibrant colors that we can adjust in the configuration of the phone itself. As a small criticism, the automatic adjustment of brightness is somewhat slow. Nothing strange, but a point to comment.

The screen offers some extra options at the software level, such as the classic night mode that dyes the panel of orange colors automatically or manually, or as the Always-on Display, to see the notifications and the time on the screen even if the phone is without use.

Samsung changed the appearance of its TouchWiz turning it into Samsung Experience, and the next step was this One UI that came along with Android Pie. A layer that remains aggressive in terms of personalization of the system although it is more consistent than in previous versions, and that has been lightened. 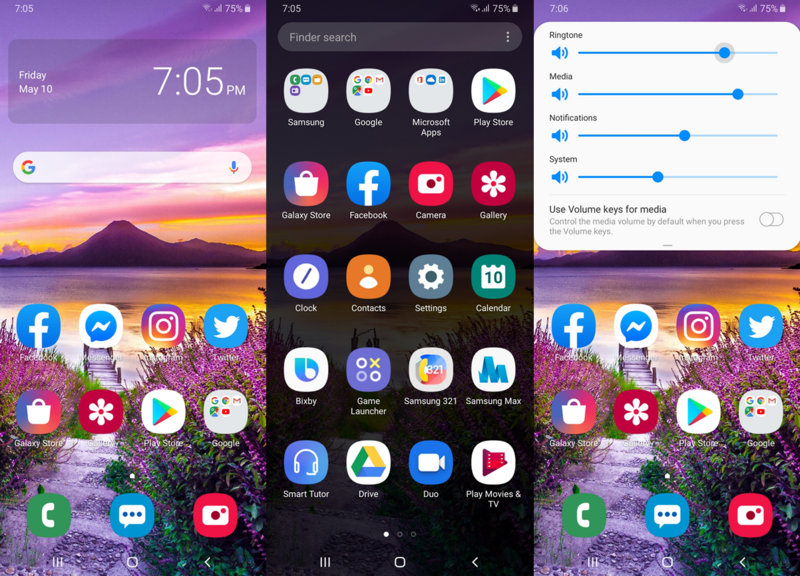 We didn’t have any pure Android experience here and it shows, and although the layer offers some interesting additions, we continue with the classic bloatware applications, like the presence of Microsoft apps, such as OneDrive, Office Mobile or LinkedIn, along with those of Google and Samsung. 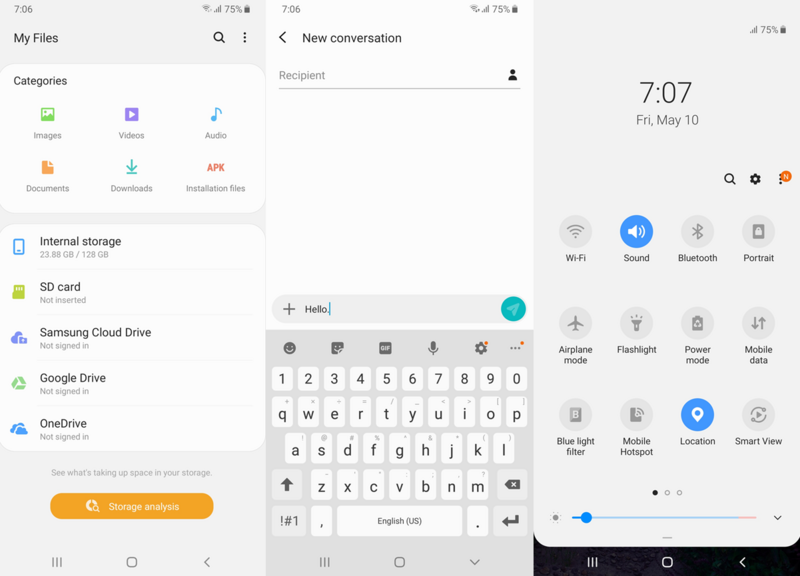 The heart of the Samsung Galaxy A50 uses the processor Exynos 9610, manufactured in 10 nm, and has four Cortex A73 cores and four A53 cores. The graphics section is responsible for the Mali-G72 MP3 GPU. The AI ​​supporting systems such as camera or face recognition is not lacking in this SoC, but for now it is nothing really relevant. 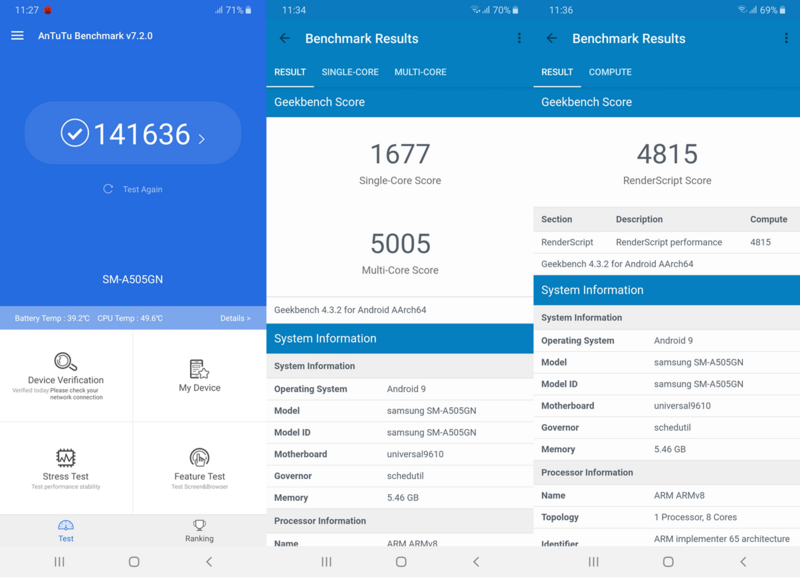 We have a quick opening of applications for the range in which we move, yes, and multitasking manages well open apps, keeping them for a long time without freezing. Of course, we are not in a range where we have been able to try games of the Fortnite category and similar, but we have found a phone capable of being measured with titles such as Clash Royale, Hearthstone or Asphalt without hardly stuttering, although in the latter, the reduction of frames is appreciated in order to offer a fluid gaming experience. In this aspect, we have not had any notable warm-ups either, although perhaps here you can lend a hand to the plastic back of the device.

We come to the part in which we must mention the fingerprint reader on the screen, and here, it is necessary to remove the shoe a bit to whip the brand. It is clear that we live the first generations of fingerprint readers under the panel and that much remains to be improved, but the performance of the Galaxy A50 mounted is lower than those we have already tested in high-end devices. And unfortunately, it shows the recognition is somewhat erratic, as the reader is a bit fussy if the finger is not exactly in the correct position and the unlocking itself is not as fast as it would be desirable.

The Galaxy A50 mounts a main sensor of 25 megapixels, one accompanied by a lens with f/1.7 aperture, and that is responsible for making the vast majority of photographs of the device. We also have a second sensor of 8 megapixels , this one with an f/2.2 aperture and that is the wide angle. Finally, a sensor of 5 megapixels with f/2.2 that does not produce photographs as such, since it is the one that applies the blur in the image. 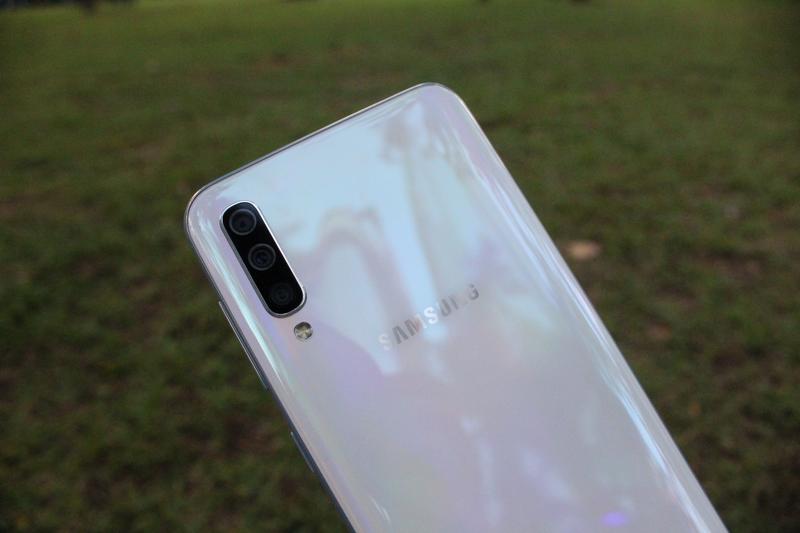 Referring to the performance, the image quality is decent when we have good ambient light, such as daytime or brightly lit interiors. When night falls, performance falls. Something to which we are accustomed in the mid-range, and which is not solved with the f/1.7 lens of the main camera, which brings more light to the images but can not prevent the appearance of the noise when we didn’t have enough light. With low luminosity, the focus also becomes slower and erratic.

There is also AI that identifies the scenes very well, but does not contribute too much to the results of the photos, in terms of quality or substantial improvements.

In terms of connectivity, Samsung has not wanted to cut as it did in the M20, and here, we have NFC, Bluetooth 5 and also dual-band Wi-Fi.

Sound is a fundamental aspect of the multimedia performance of a device such as a smartphone, and here, the Samsung Galaxy A50 moves between two waters. On the one hand, it offers us a very high volume for its loudspeaker although its experience could be improved, especially since it is mono sound and not stereo, you can see its quality fall. In addition, when the volume is close to high levels, we can see some other distortion and we miss a better support for bass that we find in other models of the brand.

Keep in mind, however, that Samsung has chosen to put an internal battery of 4,000 mAh in its Galaxy A50, and is influencing the device to have good runtimes. But the optimization of the system itself is appreciated in this aspect, and it seems that everything conspires so that the Galaxy A50 plays to be always on. 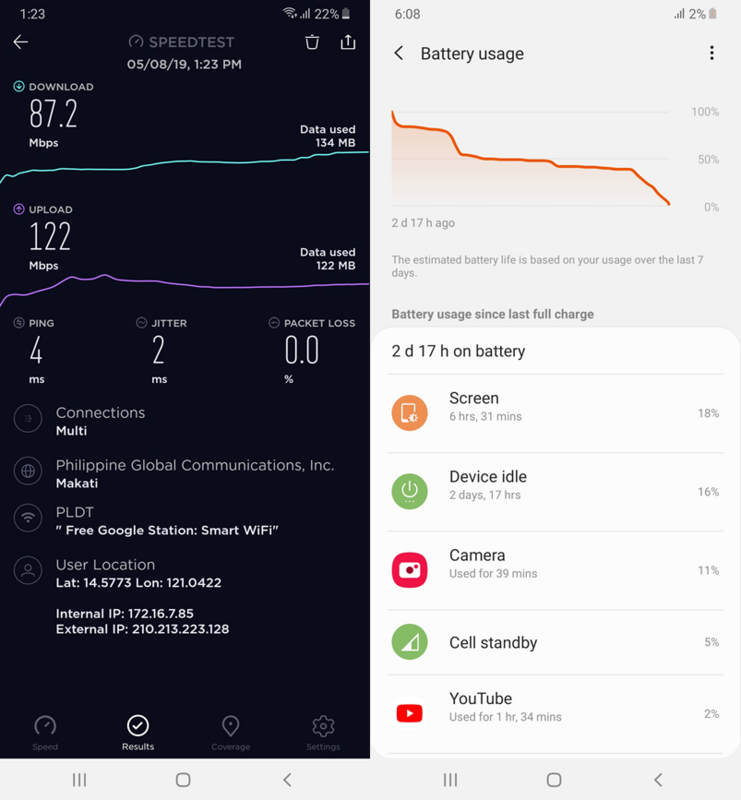 With the Galaxy A50, we have moved around the 6.5 hours of average screen-on time. About 8 hours if we have stayed inside, under Wi-Fi connection and without requiring much brightness to your panel, and around 6 hours when we have been outdoors, under the inclemency of ambient light or mobile data connection.

In the charging section, we have a positive and a negative aspect. The positive is that the device supports fast charging of 15W, which allows us to charge the phone from 0 to 100 in around 80 minutes. The negative is that the charge included by Samsung in the box is only 10W, and here the load times are extended.

With the Galaxy A50, Samsung knows how to offer us a design that we like, a robust and comfortable construction and some aspects that we value positively, such as the plastic body that improves grip and resistance, although we do not take advantage of adding wireless charge to the whole. 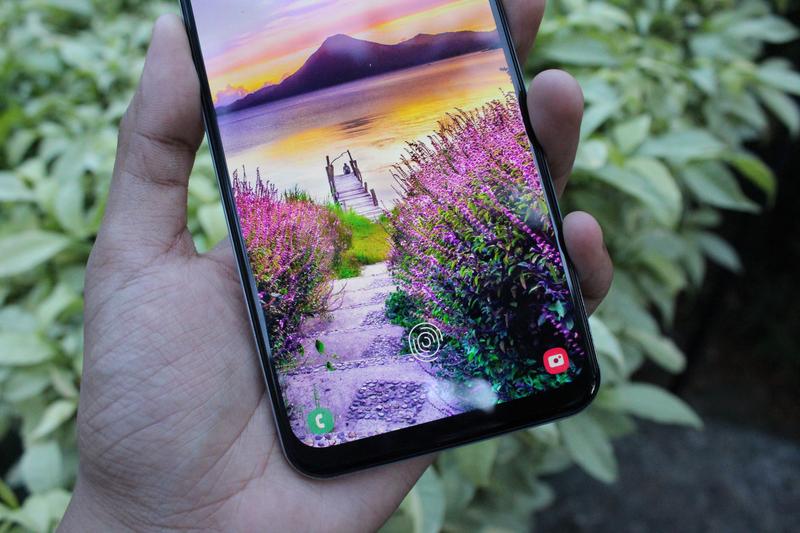 The screen is up to the expectations, the performance meets what is required with the dressing of a large internal storage and its cameras are useful and practical, although perhaps raising the bar here would have made the model more attractive. All this added to the fact that its 4,000 mAh battery performs as few, which gives the phone a fairly competitive level in relation to the competition that we see campaigning through the market.