Samsung has announced a new entry-level smartphone, which is aimed primarily at young consumers, the Galaxy A20e.

The Galaxy A20e is part of the Galaxy A series, which according to Samsung is geared towards the needs of Generation Z. For this purpose, the devices of the new mobile phone series should bring along three main features: good display to watch movies and videos, brisk performance and a great camera.

The screen in the Galaxy A20e has a diagonal of 5.8 inches, so it is definitely a small pocket-size screen for YouTube and Netflix. With a resolution of 1560 x 720 (HD+), the consumers have to compromise on the sharpness. The aspect ratio of 19.5:9 is a bit protracted, which is why the device should still be operated comfortably with one hand. In the upper center of the display is a “notch”, which houses the front camera. Samsung calls this the “Infinity V-Display”. The case of the Galaxy A20e is made of plastic.

Under the hood works the Exynos 7884B and has an eight-core processor, which clocks at a maximum of 1.6 GHz. The SoC is supported by a 3GB RAM, and the internal memory amounts to 32GB and can be expanded via microSD slot.

For photos, a dual camera is available. The main camera has a 13MP with a f/1.9 aperture, while the second camera module has a 5MP resolution with an f/2.2 aperture. At the front, there’s an 8MP camera with f/2.0 aperture. 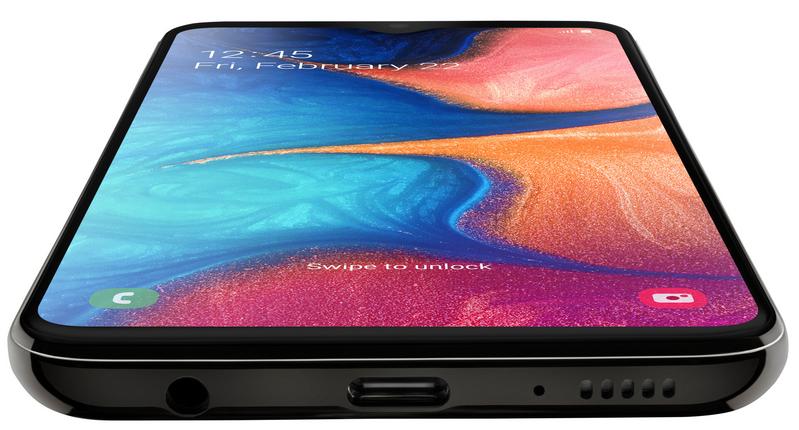 The Samsung Galaxy A20e is available in the colors: black, white, blue and coral. For the price and availability, the Korean manufacturer has yet to disclose the details.