Grab Helicopter ride, why not!

With the horrendous traffic almost daily in Metro Manila, a ride up in the air is not a bad idea. (I am actually dreaming of having the Starwars cars to be available now.)

Grab Taxi Philippines finally launched their latest service from the hangar of PhilJets, a start-up company who started operations in the Philippines in 2013.

GrabHeli is a service provided in partnership with Grab Taxi Philippines and Philjets.

1.Grab Helicopter, what is that?

Grab Helicopter or GrabHeli is the latest among the six services offered by Grab Taxi Philippines. The Malaysian start-up company started Grab Taxi booking app in the Philippines two years ago. It was followed by Grab Car and Grab Car Plus, a private ride-sharing service, and then comes Grab Express, an express delivery service, and then Grab Bike, a “habal-habal” style motorcycle taxi ride service. Grab Heli uses Philjets H130 helicopter, it is a lightweight single-engine helicopter tailored for passenger transportation, sightseeing and VIP duties. The H130 helicopter can carry 6 passengers plus the pilot.

2. How to book with (GrabHeli) Grab Helicopter

If you are familiar with Grab Taxi app, it is the same app you will use to book GrabHeli.  Available in both IOS and Android, you select your pick-up point and drop-off points (helipads). Grab has currently four helipads in Makati, Pasay and BGC.

A regular helicopter ride is expensive, that is why GrabHeli is here for an affordable ride.

A promo fare of P3,888 per person for three months can be enjoyed on a trial and promotional rate.

Our celebrity friend-blogger Chuckie Dreyfus is one of the Grab Ambassadors, yey!

4. How many minutes is the ride

From a defined pick-up and drop-off points, your aerial tour is only fifteen (15) minutes.

5. How many available helicopter Grab has

According to Philjet’s CEO Thierry Tea, they have two H10 choppers allocated for Grab Taxi. The first one is now ready and it has Grab Taxi logo and all.

While Grab Taxi is now offering cashless transaction, Uber on the other hand has started its cash payment.

Grab Helicopter rides is only on limited engagement as of this time. GrabHeli has a designated pick-up and drop-off destinations in Philjets Hangar in Pasay, one in Makati and in BGC (Bonifacio Global City).

Pre-booking is offered from Saturdays to Wednesdays and flight schedule are from 4PM onwards on Fridays and Saturdays only. 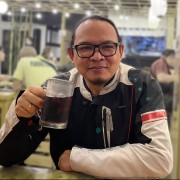