Just in! The internet-based messaging application Chikka announced that the free texts to all networks, on both the mobile application and desktop version, will end on March 31, 2018, after 18 years in service. 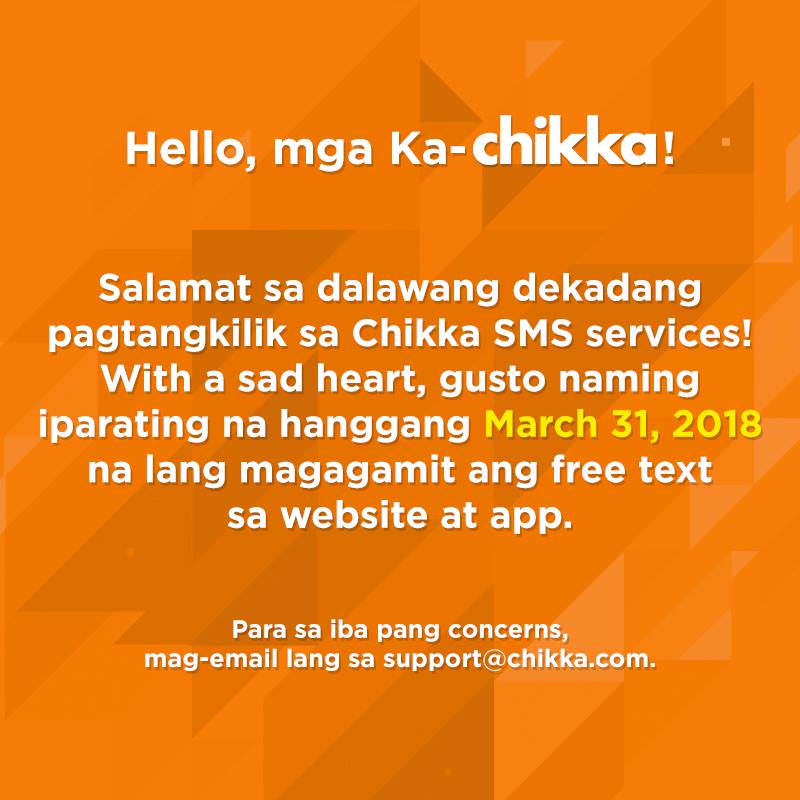 No further details were announced, but they are expecting to release a statement soon. Chikka was released by Chikka Philippines, Inc. in the early of the 21st century and has a connection with the largest telcos in the country, Smart (2001), Globe (2002) and Sun Cellular (2004), to support free text messaging (SMS) on both online and offline users.

Currently, Chikka serves in more than 45 mobile carriers around the world, including the United States, the United Kingdon, Hong Kong SAR of China, Italy, Japan, Spain, and here in the Philippines, and at present, it is available in web messenger, Android, iOS and via chrome extension.

Before the popular Facebook Messenger, Viber, WhatsApp and other Internet-based messaging apps, Chikka was popular and widely used to send a message to your loved ones when you run out of load credits.

Founded in 2000 by Chito Bustamante, Dennis Mendiola, and Alexandra Roxas, with the office headquartered in Pasig, Chikka Text Messenger is an Internet-based instant messaging application that is popular because of its free SMS or text messaging between online users and offline mobile subscribers. According to Wikipedia, it is probably the world’s first commercially successful integration of web and mobile utilities. The company’s services are currently available to over 45 mobile carriers in fourteen countries including the Philippines, Hong Kong SAR, India, Indonesia, Italy, Japan, Spain, the United Kingdom, and the United States.

With the rise of new and popular apps, a decade old and most loved traditional web services will eventually cease. Same happens with Friendster and others.

What is your memorable Chikka moment? Let us know in comments.